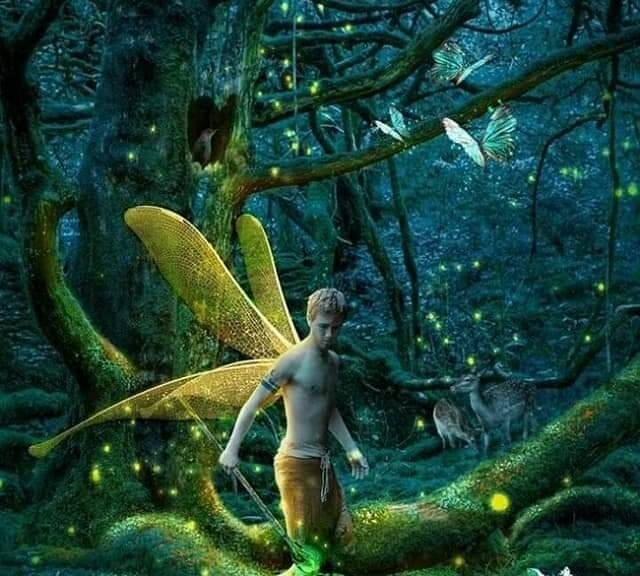 An Ancient Reference to Gays as Faerie Spirits

There is an ancient religious text from Persia that directly associates men who love men with the magical underworld of demons and faery spirits – the Vendidad of the Zoroastrian faith. Written around the same time as the 5th book of the Jewish Torah, Deuteronomy, which forbids Israelites from cross-dressing, becoming temple sex-workers, or bringing the earnings of female or male sex-workers (the males were known as ‘dogs’) into Jewish temples, the Vendidad basically calls men who sleep with men ‘faeries’.

In Deuteronomy the Hebrews were attempting to clearly define themselves as different to the many other tribes around. The prohibition in Leviticus against men sleeping with men uses the word word ‘toevah’, which has been translated into English as ‘abomination’ but etymologically is related to foreign ritual practices, and very possibly related to the Persian term used in the Vendidad. In the Zoroastrian text men who have sex with men are named ‘daevas’, translated as demons and related to the ‘deva’ spirits of the Indian sub-continent. Devas however are simply magical beings in India, not associated specifically with evil, whereas the Persians over time came to regard them as supernatural entities to be avoided. The oldest Zoroastrian text, the Gathas, calls the daevas ‘gods that are to be rejected’. In the Avesta, they are divinities that promote chaos and disorder, and in later tradition they become personifications of every evil possible.

The Vendidad is an early Zoroastrian text, dating back to around 800 BCE, that records conversations between the prophet and God, Ahura Mazda. One goes….

From nearly 3000 years ago we have this religious text directly associating gay sex with the underworld of magical spirit beings. At this period, and for another millennium until the rise of Christianity, across southern Europe and the Middle East gender fluidity and homosexual acts were strongly associated with worship of the Goddess. She was known in many forms and by many names, all served by women and gay/transgender priest/esses, and that service could include sexual acts that brought connection to the deity. In fact round the whole world gay/queer beings once served in sacred roles, as shamans, medicine men, priests and sacred sex workers… our power was taken away, as was that of women, by men seeking to dominate and rule over others, to conquer territory and accumulate wealth. This process has now reached its apogee, the world is on the brink of global disaster unless humanity changes the way it lives.

To achieve this women and queers need to be brought to the table as equals to men, and all forms of love respected and honoured.

To achieve this we all need to seek deep within ourselves to find our reconnection to the planet, to the spirit and go beyond ego to our true divine selves.

To achieve this the Gatekeepers are needed.

The journey of Gay Liberation, the gradual emergence and acceptance of LGBTQ+ people around the world, is still in its early stages. Queer people have more to discover about who we are….

SOBONFU SOME, priestess of the Dagara Tribe of western Africa – a tribe that remembers the magical role of what we call queers – said in her book ‘Spirit of Intimacy’:

“The words gay and lesbian do not exist in the village, but there is the word gatekeeper. Gatekeepers are people who live a life at the edge between the worlds – the world of the village and the world of spirit…

“Gatekeepers in the village are able to do their job simply because of strong spiritual connection, and also their ability to direct their sexual energy not to other people but to spirit.

“There are many gates that link a village to other worlds. The only people who have access to all these gates are the gatekeepers. I should mention here that there are two different kinds of gatekeeper.

“The first group has the ability to guard a limited number of gates to the other world, specifically,those that correspond to the Dagara cosmology – water, earth, fire, minerals, and nature – because they vibrate the energies of those gates.

“The second group of gatekeepers… has the responsibility of overseeing all the gates. They are in contact not only with the elemental gates but also with many others. They have one foot in all the other worlds and other foot here. This is why the vibration of their body is totally different from others. They also have access to other-dimensional entities such as Kontombile, small beings who are very magical and knowledgeable. They are known as leprechauns in the Irish tradition.

“Gatekeepers hold keys to other dimensions. They maintain a certain alignment between the spirit world and the world of the village. Without them, the gates to the other world would be shut.

“On the other side of these gates lies the spirit world or other dimensions. Gatekeepers are in constant communication with beings who live there, who have the ability to teach us how to deal with ritual. And gatekeepers have the capacity to take other people to those places.

“Gays and lesbians in the West are often very spiritual, but they have been taken away from their connection with spirit. My feeling is that without that outlet or that role in the culture, they have to find other ways of defining themselves.”

“The gay community can heal. It will not heal from focussing on combatting disease alone. A healing must include a spiritual element. And this is what has often been withheld from gay people. The religious communities of this planet have for the most part excluded, or at best ignored, their gay members. But religions is not necessarily spirituality. And it is through a spiritual connection, not a religious one, that the human community of this planet will find its healing.

“What is spiritual, what is sacred, is being redefined. It is being redefined in a fluid way. Gay people, by their very nature, exist in a state of internal fluidity that will make us vital in this time of planetary challenge. As we enter the Age called Aquarius it is useful to remember that the constellation Aquarius represents the youth Ganymede, who Zeus took up to Mount Olympus to be cupbearer to the gods, and his own lover. Gay people have a share in this coming transformation. To the ancient Epyptians, the water carrier was the source of the Nile, pictured as a man with breasts. When Jesus was preparing for the Last Supper, it is recorded in Luke that he sent his disciples into the city to meet a man carrying a jar of water, in a culture where only women were supposed to carry water.”

“To be gay is something that begins within ourselves. In begins in our hearts, in that place that is never separate from the living heart of Infinite Oneness. To be gay is something that begins with ourselves, that finds itself mirrored back, echoed back to us by the tribe of men who love men. This tribe, our people , is a scouting tribe, a Walks-Between people, bridge-making people, walking between men and women, between night and day, between matter and spirit, between the living and the dead.”

“When purposeful, spiritual connection is forgotten, the depth of sexual connection often takes it place. Sex points one in the right direction, deep into the self, into the mystery. But sex alone is not the answer to the gay dilemma of the present, the sense of meaninglessness. A sense of spiritual participation in the community of the planet is the answer. For no one else will tell us our purpose. Its discovery must come from ourselves.”

Since 1979 gay men, and nowadays an increasingly queer medley of magical folk, have been meeting in Radical Faerie gatherings and sanctuaries, seeking to create community from the heart, in harmony with nature, and to reclaim and explore our innate spiritual magic. The term Faerie was chosen as a reference to our connection to nature and spirit, as well as being a positive reclamation of the term ‘fairy’, so often used as an abusive insult in western cultures – and therefore implying a folk memory in Europe too between gay men and nature’s magic. Radical refers to getting to the roots of who we are:

“We have been a SEPARATE PEOPLE…. Drifting together in a parallel existence, not always conscious of each other.. yet recognising one another by eyelock when we did meet… here and there as outcasts… Spirit people… in service to the Great Mother.. Shamans.. mimes and rhapsodes, poets and playwrights, healers and nurturers… VISIONARIES… REBELS”

“Our beautiful lovely sexuality is the gateway to spirit. Under all organised religions of the past, Judaism, Christianity, Islam, there has been a separation of carnality, or shall we say of flesh or earth or sex, and spirituality. As far as I am concerned they are all the same thing, and what we need to do as faeries is to tie it all back together again.”