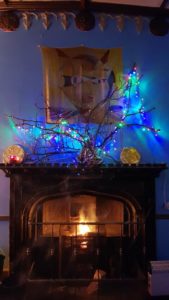 Photo of the fireplace in Blue Room at Featherstone, by Sparkly Tom

The Albion Fae have had a bumper year…

The first Albion Faerie Gathering took place at Featherstone Castle at Imbolc 2006. We held one gathering there per year for 6 years, putting down the roots of community at these Winter hideaways in Northumberland. From 2012 the pace quickened – we started to gather at Paddington Farm in Glastonbury, to meet at Featherstone in the warmer climes of Spring and Autumn – and in Summer finally in 2017 when faeries from around the world came to our hearth for an inspirational Global Gathering. Connections formed at that time have continued to develop, with much cross fertilisation going on between the various Faerie communities of planet earth. One product of this creativity is our very own social media website – Faenet.org, the work for which has been mainly undertaken by Canaan and Albion faeries.

From one gathering per year for 6 years, in 2018 we are holding 6 gatherings in one year:

IMBOLC at Paddington, with our annual pilgrimage to the White Spring and Brigit Mound. Faerienizers were Blossom, Running Water, Bridge, Earth Song, Touch Me and Starbuck. 30 faeries attended.

MAGIC GATHERING in Gloucestershire, the second appearance of this focussed space for an intimate group facilitated by Earth Song and Qweaver

OSTARA at Featherstone, 80+ faeries welcoming the new season, our 5th Spring visit to Northumberland, the faerienizer team this year facilitated by Wolverine, with Zebedee, Touch Me, Hagbard, Samicee and more on the crew.

BELTANE Spring Love Awakening Gathering – A new gathering in May in Glastonbury coordinated by Bridge with a core team of Big Sister, Paradox, Running Water, Swallow & Taboo. The gathering of around 60 fae fused core faerie themes of love, heart sharing, sensuality, sexuality, practices, celebration, community, compassion, personal growth and most importantly co-creation. The intention was to create a journey and a container where our hearts could open more, where we could make Love, both within ourselves and for each other.

COMING HOME Healing Retreat at Unstone Grange, Derbyshire – another new gathering, with an experimental structure intended to enable us to go deeper in our paths as healers of self, other and the planetary soul. Included silent mornings and exploration of emotion and expression through our moon element energies. Initiated by Shokti who brought together a team of new faerinizers – Blaze, Unicorn, Lionboy, Paradox, Samicee and Sexual. 40 faeries attended.

and still to come..

SAMHAIN at Featherstone. This gathering was fully booked within two weeks of registrations open and currently has a waiting list in operation. Taz is heading up a team which includes Running Water, Samicee, Surprise and others

As well as gatherings this has been an expansive year for other faerie get-togethers, with 70+ people at each London Drum Circle. Lots of new people are constantly drawn to this space where we feed our souls through a full moon musical and frequently ecstatic work out. Faeries have also been meeting over in the east of the city, at the Faerie Sky Garden in Plaistow, scene of an amazing pre-Pride evening of fire and ritual that drew in dozens of fae-curious queers. London Faeries also meet for heart circles, held an Ewok Woman gathering, and faeries came from far afield to be part of the Music Gatherette, which focused on ways to foster confidence and encourage spontaneous music-making and singing at gatherings . This year has seen a developing strand of WeMoon circles, an intentional space initiated by Samicee Mother of Unicorns to act as doorway for Trans, Intersex and faeries of other marginalised orientations into faerie ways. Also, a group is now holding monthly open meetings to plan for permanent residential community space in London. (https://albionfaeries.org.uk/the-emerald-village-london-faerie-housing-community/ )

The Brighton clan held space for Faeries and friends away from the intensities of the town on Pride Day in August, and earlier in the year welcomed San Francisco Faerie Joey Cain in town for the festival screening of ‘Hope Along the Wind’, a documentary about the life of Harry Hay. There have been faerie meets in the West Country, the Nottingham clan held heart space in the Nine Ladies Stone Circle, and there was an impromptu alternative-imbolc weekend on the South Downs. Coming up in September is the first North West Heart Circle in Liverpool.

A year ago at the Great Circle/FaeGM we established a new administrative structure for the tribe. Out went the roles imposed on us by bank formalities (president/secretary/chair), to be replaced by three admin circles – Communications, Finance and Gatherings/Events. Together the faeries volunteering their energy to be part of these circles form a collective Stewards Circle. All circle meetings are advertised and anyone can attend. The Stewards Circle is meeting for a Tribal Moot on Saturday 29 September to review progress of the new structure.

The Global Gathering in 2017, hosted by the Albionfae at Featherstone Castle, opened up new connections for us with other communities around the world, which some of us have had the chance to deepen during the past year. There has been a rush of Albion Fae spending time at the French sanctuary, Folleterre, and a lot of cross fertilisation with the Canaan Faeries, plus many visitors passing our way from other communities, such as Fairyland in Australia and the North American sanctuaries. Tennessee Willy of the Short Mountain tribe has just spent a few months with us and reports how awestruck he is at the vitality in our collective spirit, to observe how open and keen we in the Albion Fae are to build deep and real connections with each other. Wherever we gather, the love truly flows.

But of course as a rapidly growing community we have growing pains. One of the many ways for us to positively evolve is when someone shines the spotlight on what they perceive as a difficult issue going on amongst us and we learn, over time, how to effectively respond compassionately to that issue. There is always the risk that such issues can quickly take centre stage and obscure the sight of the amazing, positive and beautiful things we are achieving – such as a healthy balance between celebration and self-exploration, and the real and lasting loving friendships that are being formed. But we are learning and evolving and increasing in awareness that we operate at different speeds, have different ways of communicating and do so with different priorities. Our tribal energy is ‘vital’: people’s lives are changing for the better because of us, we are becoming known as a healing force within the wider LGBTQ+ cosmos, creators of sanctuary, wherein heart connections and authentic communication lead the way. Our community is in its 13th magical year and its light is strong. bright and changing the world’s understanding of queer consciousness, magic and community.

As we enter the Autumn season, the time of the Ancestors approaches.

As young a community as we are, we already have our own personal ancestors in spirit

Fairy Nuff, Barbarella, Beloved, El-Leo, Jon BlipClone, Woodchild and others who have briefly engaged with us on their journey

We are not in this journey alone

Another analogy to describe us is to see the Albion Faeries as a growing branch in the forest of Human Consciousness Development which traces its roots back to ancient times and through the more recent works of Walt Whitman, Edward Carpenter, Harry Hay, John Burnside, Starhawk, Mitch Walker, Don Kilhefner and the developing boughs and branches of the Faerie Sanctuaries throughout the world.

The branch which is Albion grew from the Eurofaerie tree but also from Queer Pagan Camp, Edward Carpenter Community and most recently has found some rich nutrients from the amazingly rich melange that is Queer Spirit Festival.

We are a still new branch but we already have our own loved ones who left, perhaps prematurely…

We can reach out with love to those in spirit

and receive their love right back into our hearts and our circles,

following this guidance that Edward Carpenter left to be read at his funeral:

“Do not think too much of the dead husk of your friend, or mourn too much over it, but send your thoughts out towards the real soul or self which has escaped — to reach it. For so, surely you will cast a light of gladness upon his onward journey, and contribute your part towards the building of that kingdom of love which links our earth to heaven.”

Autumn is a rich time of natural magic, let’s spread our faerie love and blessings wherever we tread this season…..

This blog post was written by the Albion Stewards