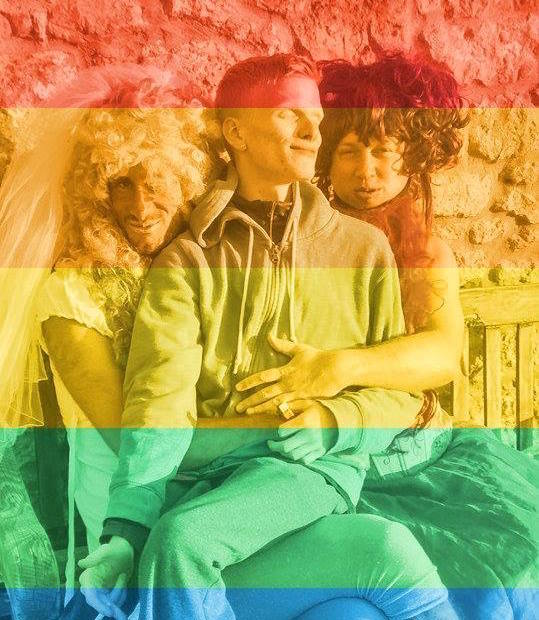 On my way to the most recent Albionfaeries Summer Solstice Gathering, on a train somewhere between Gloucester and Bristol, an idea struck me for something I could contribute during the week. I wanted to host a drag workshop.

Personally, I have a chequered past with drag and gender aspecting. I can recall when I was around 9 years old and going through my “Adam Ant phase” my Mother gave me a Cadbury’s Roses tin of makeup to go and play with. I have a vague memory of a couple of years previous to that, in The Body Shop standing next to my Mother again, dumbstruck as a man applied lipstick in the shop mirror.

However, as with most other little gay boys my survival instinct kicked in and it was time to hide such little acts of fabulosity away from prying and judgemental eyes. Also the media of the time decried those who did not adhere to the heteronormative model as perverts and freaks. Like so many of us, I took this message to heart and tried to distance myself from the world of wigs and frocks.

To me, there was an expectation that meant if you were gay you had to wear a dress. I was going to rebel against that, even if it meant conforming to established gender norms as hard as I could! Ah, the folly of the young. But this stayed firmly in place for many long years. Sure, I loved RuPaul as when I was younger, especially the year Chanel 4 had Camp Christmas, including her Christmas Special and Quentin Crisp’s Alternative Queens Message. But that wasn’t me. Even though I adored the likes of Rocky Horror, Priscilla and To Wong Foo, even Stonewall, it was more as a guilty pleasure, or at the very least as a spectator. During my years involved in local LGBT events and services I knew a few of our local Sisters of Perpetual Indulgence but I never really understood the call to personally engage in drag as me (with the sole and fleeting exception of Rocky Horror at the Edinburgh Playhouse, aged 17).

It was only under the gossamer wing of a rather loud, loving and misunderstood dutch drag queen Faerie that my ideas were challenged and altered. He taught me the humility that is the bedrock beneath the bravado. Once I saw the person behind the mask I could understand the power of the mask as a ritual tool.

It is most accurate to say that I do not present a feminine visage. Androgyny is beyond my repertoire. I am 100% bear and resigned to it.

However, these past few years, I have been exploring the world of gender dress-up as an expression of my faerieness and queerness. At the wedding of two dear friends this month I was Drag Mother of the Bride. I packed more frocks than t-shirts for my last gathering.

Not being one of the pretty queens gives me a freedom that I’ve only just discovered. Again, the faeries who have tread paths in heels or barefoot have inspired me. The ones who sought out the most vile taffeta monstrosities, the longest string of pearls and the biggest docker boots they could find. The faeries whose wardrobe for a week-long gathering is 2 scarves (and that’s only in case the first scarf blows away). The ones in figure-hugging dresses and no knickers, thin fabric showing off their cocks. With them to guide me, I can engage with drag without the requirement of having to try and look femme, or to “pass”.

Drag is a historically potent symbol in Radical Faeries, representing the reclaiming of the sissy energy, the staunch refusal to engage in the heteronormative constructs of the outer world and healing that little inner boy who just wanted to play and dress up but wasn’t allowed to freely. From the outcast queer street kids to the Native American Two Spirits, the idea of drag as a means to escape an imposed identity and to transcend into something wonderful and other-than, not less-than. I love seeing images of Harry Hay at marches and events with what I see as Faerie Drag, button down shirt with a skirt and pearls.

Early on in the gathering Wild Boar asked me about where we could set up a drag room for the gathering. We took some time to think of the best location and while we were mulling it over I asked if he would like to co-host the workshop, knowing his strengths are wildly different from mine but we complement each other well. His exuberance and playfulness is well set against my introspection and need for structure.

I explained that the workshop I’d created was designed for Faeries who might have some issues with drag, like my own from the past, or perhaps different. We would start with a discussion, look at what items we liked, have a show and tell, maybe even try things on if everything went well. He was on board and once we had the room set up we held the workshop.

This was not to be a how-to, with perfect make-up tips, contouring, padding, lashes and all the wonderful resources available through the likes of youtube. The idea was simple – how can we make drag more accessible and joyous for everyone?

We shared our stories and discussed obstacles we’ve encountered, both external and internally – questions around inclusion and gender, size, attraction, families, expectations of others. One Faerie told of how he would be repulsed sexually if a man was in drag, how he had never done it and couldn’t. Another hadn’t done drag in years, since he was much younger but had lost it somewhere along the way.

We brought all of our niggling insecurities and confusions into the open, shared without any shame and supported each other, as we tend to do. This is our process and it works.

Before long I invited everyone to find an item in the drag room that appealed to them and then we could look at it together, find the beauty and the tackiness, look at colours and textures. The idea being that a tactile and appreciative experience could then bridge into trying things on.

Within minutes we leapt merrily over a couple of stages and I couldn’t have stopped people trying things on if I had wanted to! All the mutual support that was needed was on-hand, whether that was offering encouragement or accessories, helping to find the perfect dress, dispensing cuddles or the great sari emergency that befuddled the best of us.

It is one of the most treasured memories I’m taking from this gathering. A room full of people showing off, becoming extroverted and fearless, transforming together in a carefree and communal way. We then hived off into other areas of the gathering, spreading our energy and enthusiasm with us, earning more admirers as we went.

Faerie Drag Power for me is about playfulness, empowerment, creativity and challenging norms. These are deeply fey values that enrich our experiences not just of gatherings but life too.

For anyone wishing to connect with some of the more queer political applications of drag, I recommend Men In Frocks (Kirk, Heath – Gay Mens Press, 1984). The chapter on the Rad Drag Queens that emerged from London’s Gay Liberation Front in the 70 may prove helpful reading for those who view drag as inherently misogynistic. For an exploration of drag throughout history and on a global scale, try The Changing Room (Senelick – Routledge, 2000). It’s about more than just Drag Race, hunties – crack a book occasionally. Then come back with a 700 word essay on the Cockettes.

This site uses Akismet to reduce spam. Learn how your comment data is processed.