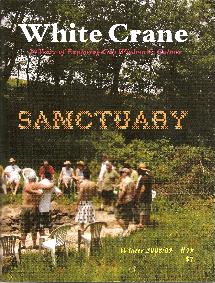 in the words of those who were there!

‘Fairy was championed among hippie gay men, a self-referential term like the more inclusive “flower child.” It contained a reference back to childhood fascinations with insight into hidden, magical realities which the regular people, the adults — the straight people — knew nothing of. After all, people couldn’t see fairies unless the fairies wanted to be seen. For many in the “first generation of gay men” — those who came out as they were entering young adulthood at the time of the rise of gay liberation in 1969 — the same generation that years later was struck hardest by AIDS, fairy was a reference to Peter Pan, the creation of the 19th Century homosexual English writer J. M. Barrie, revivified by Walt Disney in the 1950s as that obviously “cute young gay guy” with the pixie friend who saved middle-class children from normalcy with the “good news” that if you just believe (i.e., if you’re not fooled by the socially accepted conventions about how things should be) you can fly.

“Fairy” was a term of derision turned positive in the style of “Jew” for Hebrews and of “faggot” for homosexuals. Though, in fact, “”fairy” was never, like faggot, an angry term of derision with overtones of violence and hate; rather it conveyed — and conveys — a delightful suggestion that, just as we are, gay men are light-hearted, whimsical and non-serious, i.e. “flighty.” In the hard, deadly serious, macho competitive dog-eat-dog world of modern, urban heterosexual males, the news that it’s okay to be non-serious is the proverbial breath of fresh air. It’s why everybody loves an effeminate homosexual as comedian (Are You Being Served’s Mr. Humphries, for example). It is interesting to observe that the effeminate comedy figure is often the truth-teller, the jester who can say anything to the King, the one who can “tell it like it is.”

‘Toby Marotta argued in The Politics of Homosexuality that gay liberation was the flower of the counterculture, the perfect demonstration of the notion of revolution through consciousness-change. Clearly when homosexuals changed how they thought about themselves, spurred on and supported by the work of the early activists (Harry Hay, Donald Webster Cory, Frank Kameny, Dick Leitsch, Craig Rodwell, Randy Wicker, Arthur Evans, Arthur Bell, Jim Owles, Marty Robinson, Bruce Voeller, Mitch Walker — to mention only a few), instead of miserably suffering their homosexuality, hiding and trying to change, they came out to playÉ and they discovered there were more of them than they’d ever imagined. They weren’t alone. And the others they discovered were wonderful people: attractive, appealing, sensitive, considerate, plucky — sometimes, maybe, a little “fucked up in the head,” as it were — but overall great people to have as comrades-in-arms (the flesh-and-blood kind). And that discovery changed gay community and gay identity forever.‘

from Contradictory Views on Radical Faerie Thought, by Mitch Walker, 1997:

‘In early 1979, Harry Hay, his longtime companion John Burnside, Don Kilhefner and I issued a public Call for a Spiritual Conference of Radical Faeries that unexpectedly drew hundreds of gay seekers to a remote desert retreat over the Labor Day weekend. We had modestly expected 50-75 guys to respond for this meeting on Gay Spirit, but the way-overflow crowd was so enthusiastic and the resulting weekend so fabulous that we immediately resolved from then on to foster Radical Faerie gatherings and circles wherever possible. At our second national gathering in the Rockies the next summer, even more queer men responded, and the resulting week-long effort had an even more smashing impact building on the first. And thus a grassroots social movement was born, the Radical Faerie Movement. Since then, Faerie circles and gatherings have spontaneously sprouted all over, nationally and overseas, and have become an ongoing feature of gay community life for over fifteen years.

‘Not only is the Faerie movement a significant part of contemporary gay life, but it is a uniquely influential one. It is the first indigenous spiritual tradition created and sustained by the gay male community in modern times. By “indigenous” I mean gay-centered and gay-engendered, in contrast to the various gay synagogues, churches, covens etc. In the latter groups, gayness is incidental or additional to the tradition espoused, while in the former it is central and causal. Radical Faeries celebrate and explore the Gay Spirit, which is itself the source of spiritual existence, wisdom and initiation. Because of its indigenous, gay-centered nature, the Radical Faerie movement pioneers a new seriousness about gayness, its depth and potential, thereby heralding a new stage in the meaning of Gay Liberation.

‘Over the years two strands of thought have developed about what the Faerie Movement was and should be — and some significant animosity between them. These strands can be identified by two charismatic characters in recent gay cultural history: Arthur Evans and Harry Hay.

‘Arthur Evans was a homosexual graduate student in philosophy at Columbia University who was politicized by the student uprisings that rocked Columbia during the spring of 1968. After the Stonewall Riots the next year he became involved with Manhattan’s fledgling Gay Liberation Front, and he helped establish the Gay Activist Alliance to supercede GLF. Then in the early 70s, Evans moved to San Francisco and, still the scholar, in 1973 began publishing articles on his own researched, philosophized and radicalized vision of gay history. In 1975 he and some friends formed a small pagan-inspired ritual group called “the Faery Circle” to act out the ecstatic pansexual revels he believed he had uncovered in the hidden past of Western Europe. In 1976 Evans gave a series of public lectures on his research, and in 1978 published his influential book Witchcraft and the Gay Counterculture.

‘According to Evans, a pagan-influenced counterculture had long survived in Europe after the triumph of Christianity, featuring ecstatic sexual worship of nature, the Great Mother and a horned consort god typified by figures like Dionysos, Pan and Cernunnos, and a salient feature of this pagan counterculture was that its leaders were often women and gay men. It was this non-conforming counterculture that the Christian Church persecuted as “witches.” Famous from this argument is the notion that the epithet “faggot” derives from the use of homosexuals as tinder for the bonfires that burned witches and heretics.

‘Evans argued that by following this pagan-descended, goddess-centered, pansexual baccanalian spiritual tradition, gay people today could integrate a sense of gay pride, love of nature, and spiritual power into an ongoing experiential synthesis. This historical tradition, he said, was the basis of what has come to be called the Radical Faerie Movement.

‘The other strain of thought can be identified with Harry Hay, co-founder of the Mattachine Society in 1951, and perhaps the pivotal figure in the creation of the modern gay movement. Hay was an idealist, non-conformist, and Marxist in the 1930s; he taught music history at the Southern California Labor School, and even as early as 1948 was trying to organize his homosexual friends into a political movement for social change. Important to Hay’s development is that his first homosexual experience had been with someone who had known a member of the short-lived Chicago-based Society for Human Rights in the 1920s that had been modeled on the earlier homosexual rights efforts in Germany by such men as Magnus Hirschfeld. Through that homosexual bonding, Hay was connected to a history, and a succession, of homosexual identification. Indeed, already by 1950 Harry Hay, building on earlier gay-centered thinkers, like Edward Carpenter and Karl Ulrichs, was defining gays as a separate people with our own characteristics and dimensions. And by 1970 he was articulating a magical “gay window” on reality entirely “other than” and alien to nongay thinking. In the early 70s he established a “circle of loving companions” to purposely live and explore these insights in gay consciousness. Hay’s fundamental concept is that what we today call a Gay People can be found in all times and places, such as the “third gender” people of tribal societies, or in European tradition, such as the original Mattachine brotherhood of free-thinking, liberated troubadours during the Middle Ages. These Mattachines were not simply homosexuals among groups of pagans. These were consciously homosexual people, and if they were attracted to paganism it is because, as homosexuals, they were opposed to the oppressiveness of mainstream culture, and were not “sexually liberated” because they were worshippers of Pan, but because they were queer (see Harry Hay, Radically Gay).

‘Harry Hay and Arthur Evans make for a fascinating contrast. Here were two gay men, each basically unknown to the other, promulgating similarly magical visions of gayness with parallel theories of sacred gay roles in past societies. Yet their visions went in diametrical directions. Arthur’s led to pansexual ecstatic revels infused by a man-and-woman-loving horned god and his mother, whereas Harry’s vision led to a reunion with one’s lost original Lover in concert with others through “subject-Subject consciousness” to thereby attain a homosexual cosmic wholeness that unlocks spiritual and creative treasures.‘

‘Harry, myself and the other founders — holding to the viewpoint of a Gay People — only came to use the word “faerie” as a title for a “movement” late in our thought process (this was a collective effort) and then as a reference to the “other” world of the Little People in Celtic lore, not to the outlaw worshippers — of all sexes and orientations — of the “old religion” of medieval Europe. In our view, faeries are the supernatural denizens of a homosexual world both feared and revered by the ordinary folk. The original faeries were so-called not because they worshipped the Three Fates, as Evans says about the fey leaders of pagan traditions, but because to encounter them was always highly fateful. In my opinion, Arthur Evans’s pansexual Dionysian vision is not actually gay-centered. The Faerie movement is “Radical” not because it is anti-Establishment but because it makes a revolutionary shift to homodeity itself as source of spiritual truth, rather than to alien sources — whether the breeder God of Christians or the bisexual Bacchus of Arthur Evans. Evans is, not surprisingly, a constructionist on gay orientation, claiming that the “dichotomy of homosexual vs. heterosexual is itself a modern cultural construct and that it fails to apply to the pan-sexualism of many ancient societies.” In contrast, Harry Hay and I are essentialists who feel there is a unique Gay Spirit separate and different from other sexual truths, occurring in all times and places. When we called the Faerie gathering in 1979, we were aiming to reclaim and explore the magical homosexual universe known by queer wisepeople in all cultural traditions. The tradition of gay radical essentialism expressed in the 1979 Call marks a historic break with the earlier-70s efforts at repossession of stigmatized gay labels: the Sissies, Faggots, Faeries, etc. of that era. These earlier efforts sought to theoretically desegregate then-current movements such as the counterculture, feminism, and socialism to include homosexuality, in effect subsuming gayness toward other agendas. Such efforts reflect a political position that minimizes group differences. In contrast, the Radical Faerie movement successfully arose on the ashes of these earlier efforts precisely because of its source in a different, gay nationalist tradition.‘